It is time for you to hear the true story of the Bunpins of EinBunPin (Eye-n-bun-pin) Lagoon.

Before going on I would like to clear up a little thought you might have rattling around in your mind at this point. Bunpins are not Bunyips. They are two completely different creatures.

Bunpins are called Bunpins simply because they come from the lagoon with a name many people find hard to say. That lagoon is the EinBunPin Lagoon with EinBunPin pronounced   Eye-n-bun-pin.

Bunpins are as true as any other magical creature can be. When we read about magical creatures we think of them as living in far away places like Ireland or Bavaria, but this is not so with the Bunpins.  As with any rare creature you may well think too that their home would be secret and remote; somewhere in the Simpson’s Desert perhaps or in the middle of an impenetrable rainforest on Cape York Peninsula.  No, Einbunpin Lagoon where the Bunpins Live is not at all remote. It is smack-bang in the middle of the village of Sandgate on Bramble Bay in Queensland.  Now isn’t that a surprise!

This does not mean you can wander out to Sandgate anytime of the year and expect to see Bunpins. Tourists coming out with cameras expecting to surprise a Bunpin in eating a cream bun in front of the old townhall clock tower, splashing about in the lagoon or scaring children on the way home from school will be sadly disappointed.

You see Bunpins are winter creatures, and don’t make their first appearance until the first dark moon in June and then quietly disappear on the first full moon of August.  However, a word of warning!

If you are in Sandgate when the Bunpins are about don’t go down to the lagoon after dark for the Wooniemoon tree may be about. It is a ghostly tree that glows like the moon and moves silently around making ghostly sounds. For it knows all the sad tales of the EinBunPin Lagoon. The Wooniemoon tree brings the Bunpins and it takes them away. It has the power to take you too so do watch out.

Christopher Eipper, a German missionary, recorded the name of the Lagoon back in 1840 when Aborigines of the Turrbal tribe were still living their traditional ways. As he recorded their traditional way of life he heard them use words like, Bun Yun Pin, Yin Pin Bun to describe the lagoon as a place where they got tuberous roots for bush tucker. The roots came from a fern we know as the Bungwall Fern that grew around the margins of the lagoon.  Once the aboriginal women had gathered these roots they would pound them flat with a stone into a biscuit shape and then roast in the fire.

Ein in EinBunPin is German and so today we have a word that is part aboriginal and part German that we now broadly interpret as the lagoon where one gathers roots.

None of what I have told you so far explains the Bunpins. Not all Bunpins are the same. Some of them are the Kakapookees that look like black jumbled tree roots and can squash themselves as flat as shadows. They creep around on very long toes and hide in holes.

There are also Mingee Whingees. They can be very naughty and mischievous and like having endless fun.  They love hiding your socks or stealing them.   They use socks for all sorts of things such making nests in trees, under the beds or in drainpipes, and for wearing on their heads.

There are Bunpins called Stickleaves – they are little tree creatures that have stick like bodies and leaves for wings. They rustle the branches, and drop seedpods down. Stickleaves are secretive and don’t like being seen.  They dress themselves using flower petals and blossoms that they cut and shape with their teeth. At night they fly from tree to tree with tiny lamps then sit around their lanterns whispering stories about the Wooniemoon tree.

Whatever other name we might call Bunpins, Bunpins are Bunpins because all of them are parts of many creatures that once lived in and around lagoon, and all of them belong to the Wooniemoon tree, the spirit tree of the lagoon.

How did the Bunpins come to the lagoon?

There are many stories and myths concerning the Bunpins, but this is the story I know best, and the one I think is the truth on how the Bunpins came to be. 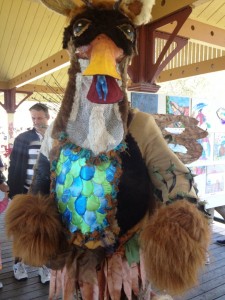